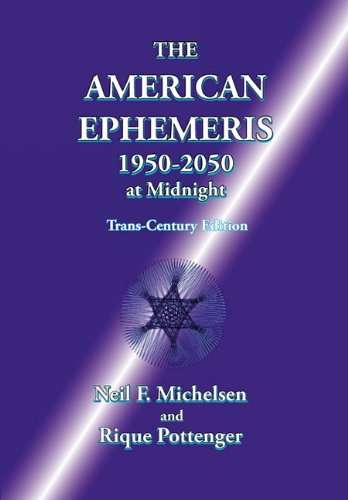 The American Ephemeris 1950-2050 at Midnight, The Trans-Century Edition, is published in response to multiple requests for a one hundred year ephemeris covering these “most useful years.” With the years 1950 through 2050, only one ephemeris needs to be at hand, especially when traveling, for an astrologer to do quick lookups of both birth data and transiting data over the expected life span of most people currently living. Since the 1976 publication of the first version of The American Ephemeris, 1931-1980, Neil F. Michelsen’s ground-breaking series of ephemerides for astrologers have consistently set standards for accuracy in astrology, becoming indispensible to astrologers worldwide at every level from student to professional. The tradition continues with the addition of this new tropical ephemeris spanning from mid 20th century through mid 21st century. Rique Pottenger has revised and expanded the Michelsen programming with updated Jet Propulsion Laboratory data and improvements in the computer generating program that, for example, enable finding double ingresses in a single day, plus more accurate station times. A new formula increases the accuracy of the Galactic Center calculation. Other new features have been added, the most obvious of which are the dwarf planets Ceres and Eris, in response to the 2006 decisions of the International Astronomical Union. Monthly positions have also been added for the remaining three of the former four major asteroids in wide use among astrologers, Pallas, Juno and Vesta, and also for the centaur, Chiron.

The Sabian Symbols in Astrology

The Book of Rulerships

The 360 Degrees of the Zodiac